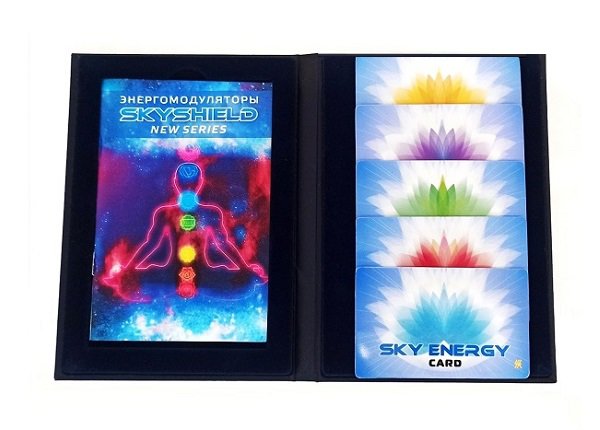 The energy modulator is a reliable, not requiring a power source, powerful shape generator, generating a voluminous torsion field of the right rotation, which beneficially affects bio-objects and humans. The forms of the resonating structures of the energy modulator are calculated and formed on the basis of derivatives of ancient Vedic measures of length and a number of complex mathematical functions.

For ease of use, the device is placed in an elegant plastic or leather shell with a bank card format: 85 x 54 mm. On the outer shell of the energy modulator, a lotus flower of one of 5 colors is depicted on a blue background. Each color corresponds to the energy modulator responsible for certain human chakras:

No. 1 - Red-Orange - Muladhara and Swadhistan.

Since the meaning and properties of each particular chakra are described in many scientific and isoteric sources, we give only a general description and schemes for using the new series of energy modulators.

A new series of SkyShield energy modulators is a unique and simple mechanism for fine-tuning the human energy information system. The energy modulator has a harmonizing effect on the subtle bodies of a person, in particular, eliminates the imbalance and mismatch of energy levels in the human chakras and meridians.

As a result of applying the energy modulator, we get:

Water and products treated with an appropriate energy modulator enhance its harmonizing effect.

Fundamental principles of the use of energy modulators for structuring aqueous solutions and food products:

1. For the treatment of water and food products, non-metallic containers are used, under which an energy modulator is placed.

2. Adequate processing time for aqueous solutions of up to 3 liters and food products is 15-20 minutes with preservation of properties for at least 24 hours after processing.

3. Between meals, you can drink several glasses of structured water, bringing its total volume per day (not counting other drinks) to 25-30 ml per 1 kg of weight.

To configure the human energy information system, to eliminate blockages in human channels and chakras, energy modulators are applied to the corresponding chakras for 5-10 minutes, several times during the day until a stable effect is obtained.

To obtain analgesic and anti-inflammatory effects for bruises, sprains, pains - energy modulators must be applied directly to the chakras, which are responsible for the painful zones. Estimated exposure time is 15-20 minutes, several times during the day until a stable therapeutic effect is obtained.
In order to increase the period of use, the energy modulator is not recommended to be subjected to mechanical stress, immersion in liquids and sudden changes in temperature.

With careful handling of the energy modulator, the period of its use is unlimited.