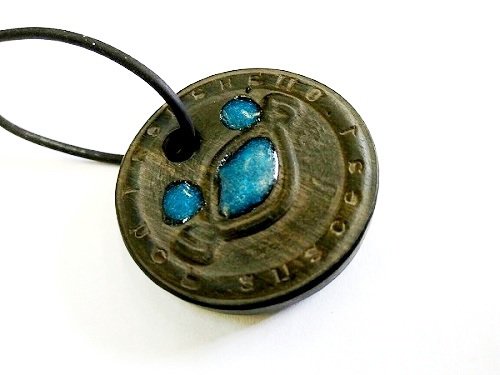 PENDANTS ARE VERY POWERFUL. CARE SHOULD BE TAKEN TO USE THEM.

Many times amplified version of the pendant "Panacea" based on E-technology.

At the back of the nego with the "roofechkoy" and it is much more powerful than the pendant P.

Pendant with front side has two hollows. In one flooded meteorite substance, similar to the 3.0 S++ (only 10 times less, because the bracelet 10 links and there - each), in other shungite powder passed special processing.
In General, it is certain the two poles, providing extra power to the pendant and configured to a desired state associated with the 2.x and 3.0.

Therefore, the pendant is better cooperating with the 3.0 and particularly with S++. On the reverse side of the pendant caused laser engraving. This is the first time when I used maximum laser power....

In the Central part of the pendant (except for the two holes with the above-mentioned substance) is covered with enamel cold cure.