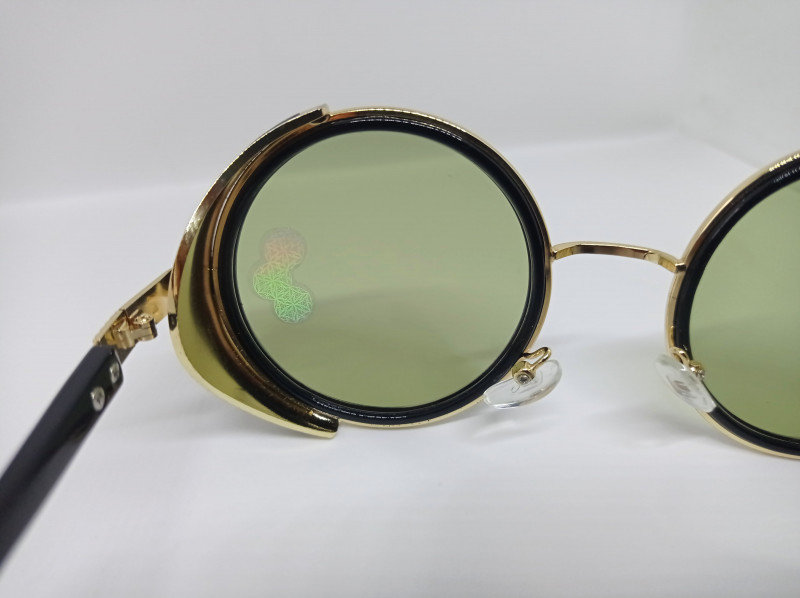 1. Introduction. General description and purpose of the device

Visual perception has physiological optical moments, but is not limited to them. It seems to us that the world is as we “see” it, that objects have colors, shape, location and move as they are in the objective external world. However, in fact, what we see, what we focus on by 70% in our perception and knowledge of the world around us, reflects objective reality least of all, less than auditory or tactile sensations. We see a clever digital model, modulation, built by the brain based on information coming from outside.

Before entering directly into the optic nerve bundle, the visual information undergoes significant changes due to both the optical system of the eye and the complex structure of the "computer" of the visual apparatus, and undergoes external correction - implants and imprints, which are easier to integrate and make informational correction at the level visual computer and corresponding frequencies, and not directly in the nervous system after the receipt of signals from the optic nerve.

All of these are limiting factors that limit real vision ("vision", "subtle vision"), which was actually natural for a person. However, many people have difficulty in the process of "clear vision" (also called "direct vision"). 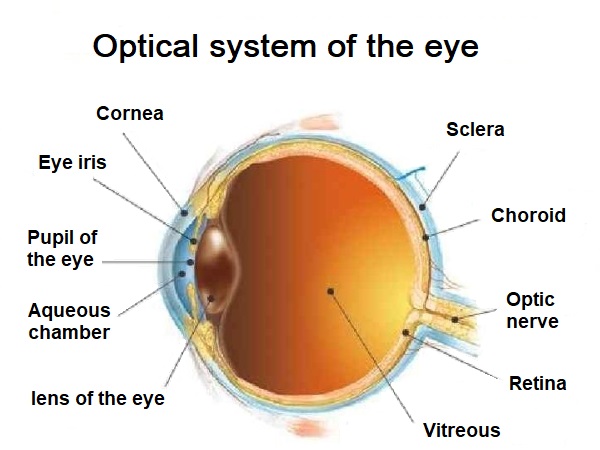 But after passing through a preliminary optical distortion, the light does not immediately fall on the light-sensitive cells, which lie in the depths. Brain research suggests that this is far from the only processing of direct optical information before its formation in the visual cortex of the brain.

First, the light hits a layer of ganglion cells that form an electronic connection with the brain. Before transmitting information to the brain, ganglion cells carry out its primary processing, which is very complex. The ganglion cell layer can be called the “peripheral computer” of the visual apparatus. It is in the ganglion cells of the retina (5) that there are many implants and imprints that produce complex informational correction. Some researchers even believe that the very appearance and structure of ganglion cells was due to the need to correct (cut and modulate) the incoming visual information in humans as a biological species. 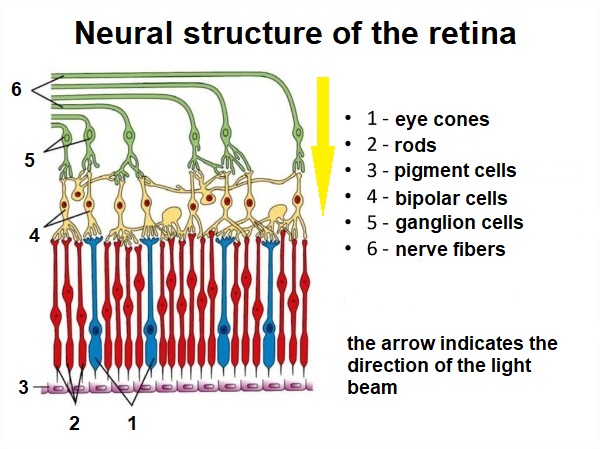 The "wires" from the ganglion cells run along the surface of the retina to the optic nerve, the trunk cable that leads to the brain. A place known as the “blind spot”.
Visual information is now 70% of all information perceived by a person. In the nucleus of one photoreceptor cell, about 1 GB of information is encoded. The visual computer uses 125 million photoreceptors, which process a data stream of about 125 PB (125,000 TB!) Of information.

British biologist Richard Dawkins in his work proved that the processing of incoming visual information evolved historically, due to human evolution, and the complication of the visual apparatus, as the most urgent. There are pluses in such processing, there are minuses.
One of the disadvantages, as noted by American researchers D. Campbell and D. Novick, is that there are both incoming and outgoing visual signals, and outgoing signals are quite easily detected, processed, modulated, switched, etc. As a result, a signal similar to a television broadcast is transmitted to the visual part of the cerebral cortex. 70% of all human perceived information is a modulated signal.

The changes are so familiar that they become natural. The fact that we see the world as it is is not questioned. The faces of people, the surrounding objects are familiar to us, are recognizable and therefore the fact that the incoming signal is cut off and significant changes are made does not cause any alarm.

Through various techniques, mainly associated with turning off visual perception, special settings of the brain or switching to other channels of information perception, a person can achieve "vision" ("direct vision"), that is, expand the perception of information from the outside world and bring it closer to the real , objective. But it turned out that visual “vision” is also possible, that is, direct vision without turning off visual perception, it is enough to make corrections that neutralize changes in the process of receiving and processing visual information. The Clear Vision device is used for this purpose.

Initially, when developing the device, we were driven solely by curiosity. But the desire to see the world differently, expanded, “uncircumcised”, closer to reality, resonated with many.

Together with specialists in the field of optics, a device was developed that combines optical and informational properties to maximize the elimination of distortions in the visual signal. The key part of the device is lenses with special spectral characteristics and a holographic module. The optical properties of the lenses cut off the main frequency spectrum of the action of implants and imprints, and the holographic module minimizes informational distortions of the visual signal.
Considering that about 70% of the information we receive from the visual center, the differences should have been cardinal. The expectations were confirmed.

In the process of testing the device in the first minutes, a change in the perception of the world around was revealed in the direction of openness, positive perception, ease, expansion of perception, the receipt of new information and much more. The effects of the Clear Vision instrument were similar to those of long-term training to develop "fine vision."

The ability to see does not develop immediately, but incrementally. The brain tends to save energy and build a familiar picture that corresponds to the current “picture of the world”, which does not lend itself to changes immediately. Although the incoming information is already different, at first, information that is very different from the current picture of the world is initially ignored by the brain. But the longer-term effects, that is, the effects from the functioning of the brain, which operated on information that was cleaner, closer to reality, were even more extensive and impressive.

Such "pure" information is better absorbed by the brain. There is an “informational detox” of the brain, improvement of thinking, memory, attention, all cognitive functions, general psychoemotional background, and an increase in the general level of energy.
The picture of the world is significantly expanding, often people began to read information, looking at an object, first spontaneously, then controlled. And since both light and other channels for receiving information are ultimately translated into the same nerve impulses, not only the content of visual information changes, but also all information coming from the surrounding world, there is a significant change and expansion of the whole picture of the human world, its global transformation affecting almost all spheres of human life.

Forum discussion ---> Clear Vision. Glasses for the development of vision
With this product buy
0