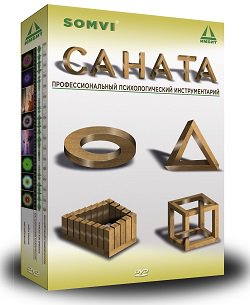 Simultaneous impact on the visual and auditory system.

A set of audiovisual psycho-corrective programs (A-VPK programs) SANATA is a professional psychological (psycho) Toolkit for practitioners psychotherapists, psychiatrists as well as psychologists and social workers.

The title "SONATA" is not a grammatical error spelling the word "Sonata". Set SANATA has a name from the name of one of the And-VPK programs are included in the kit, and it is formed from the Latin word "sanatio", which means treatment and rehabilitation. A consonance with the word "Sonata" is not accidental, given sound (music) the translation of a program.

Psychotherapeutic effect And VPK programs is the simultaneous impact on the visual and on the auditory system on conscious and unconscious levels, which allows for quick entry of patients in the optimal psychophysiological state (a trance) and effective procedure of therapy.

This is necessary for immersion of the patient into a state of deeper trance when conducting psychotherapy sessions in terms of medical institutions, to intensify and accelerate the correction process and for more efficient use of the time allocated for physiotherapy and rehabilitation treatments.

And-VPK programs include four groups of factors (mechanisms) impact on the visual and on the auditory system, and through them on the brain, on the physiological condition of the body and on behavior:

•cvetovodstvawave effects of light radiation in the visible spectrum. Used the color effect to all the visible light spectrum in serial mode of presentation complementary colors - "contrast sotomesa" that greatly enhances the perception and assimilation of light energy.

Of colors included in the color range, the sequence of color changes, duration of exposure of each color is directed to the formation of the optimal psychophysiological state, in this case, to achieve relaxation and a trance state that reduces anxiety, eliminates state of tension and muscle hypertonicity and increases the level of suggestibility.

•removestate- combination of rhythmic light and color stimulation of the visual analyzer, as well as the influence of acoustic frequencies in a frequency range of auditory perception, corresponding to the physiological fluctuations, the purpose of which is to change the functional state.

In the acoustic channel uses a more complex set of sound removestate, while each And-VPK-program it is different and corresponds to the intended purpose of the program.

•unconscious visual impactsignificant semantic information imposed on either subthreshold (subliminal) level of perception of displayed frames with a frequency of 10 +/- 2 Hz and duration of exposure not more than 10 msec using the effect of forward and backward masking (on a "25-th frame"), or using a masking effect on the principle of "split frame".

Unconscious visual impact in A VPK programs implemented in such way that the footage from the semantically significant information - the unconscious suggestive installation (NSI) - arise in the projection of a rotating three-dimensional body (in this embodiment, Cuba), i.e. in the zone of the graphical interface, fixing the most attention.

•unconscious auditory impactis that pre-voiced and digitally recorded audio tracks with suggestive installations masked in the background sound so as to be inaudible at the level of consciousness.

Thus, an effect of neosoznannoi suggestible information while maintaining the semantic load of the impact. The effect of "neosoznannoi" is achieved by a special technology of masking using the program "SOMVI-mix".

As in the auditory and visual effects, unconscious suggestive installation (NSOs) are formed from emotionally significant information. Thus in auditory stimulation can be used not only words, but also emotiogenic sounds, rhythmic sounds, the necessary frequency of exposure, etc. On the semantic content of the NSO are not complete and grammatically precise phrases, as are a set of phrases designed to optimally implement a mechanism psychosemantic conditioning.

The scoring of the NSO is subject to the necessary voice and intonation characteristics. NSIS automatically looped and constantly repeated over the sound of the entire record, the resulting artificial deliberate change in values of the semantic elements of memory and the gradual modification of the psyche, emotional state and behavior in accordance with the purpose of the program.

Methodologically, the construction of phrases suggestive exposure is performed in accordance withthe principle of semantic conditioning(Luria A. R., Vinogradova O. S., 1971). In accordance with this principle, the verbal stimulus ("trigger" or "semantic driver" at I. V. Smirnov), has a high subjective significance, provokes related affective States, and initiates related semantic field, updating the associated affective experience. The greater importance of the trigger, the more emotiogenic effect it will have.

Semantic effects in And VPK programs is not a process of suggestion (suggestion), andimplantation of significant information in the semantic field of memoryhaving identical emotional markers (individual significance) with the emotional value of the structural units of the NSO. Given neosoznannoi described process, all changes are perceived by the patient as their own, as a natural course of events.
Suggestive information in A VPK programs presented through the GUI and through the acoustic channel, identical or complementary in meaning.

After starting A VPK program starts sounding background sound (music), in which is mounted the unconscious auditory impact. Auditory effects (recurring NPC) present in the background audio throughout playback But the MIC program.

Almost simultaneously with gradually increasing the brightness of the screen there is a color graphical user interface in the form of constantly changing the color of the octahedron and rotating in the center of the cube (fixing the attention).

2-3 minutes of playback (different programs, this time a little different) in the field of the rotating cube with a certain periodicity begin to appear "pop-up" frames with specific images. The frequency of appearance of frames 1 frame in 24”.

The duration of exposure of each "pop-up" frame - 8". In time intervals between the appearance of the pop-up staff continues to implement the rotating cube. Play "pop-up" frame ends for 2 - 3 minutes before the end of the session.

At the end of the session there is a gradual remission of music and dimming the color of the graphical interface to their complete disappearance.

Usedfourmechanism of impact on psychophysiological state and behavior: