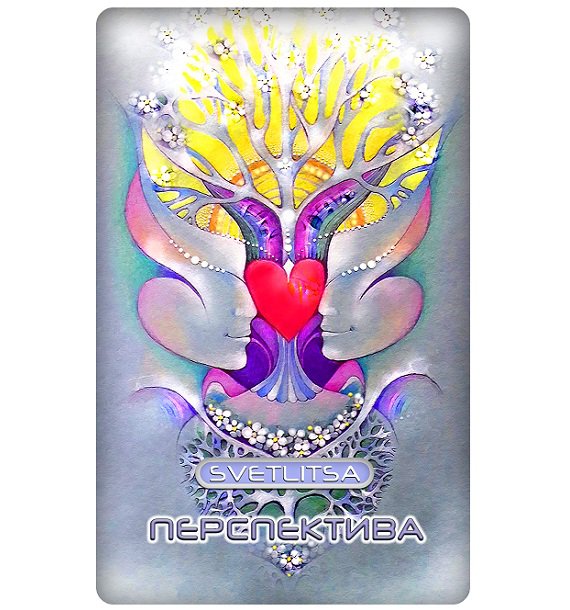 You are the one who:

Translated, Perspective means a view of the future. What is a view? A view is a slice of the outer layer of reality that is available for interaction. That is what is visible. And if what you see doesn’t like, is it futile ?. How to be How to switch to another species, to a more promising life? When a person opens up several different perspectives - his life becomes more diverse. Agree, it is more interesting to choose between several views of the future than to have only one option.

When you use the Perspective card, the options for the future become clearer and more amazing. Unpromising means limited, dead end, without a future. In the word "perspective" you can see the "spectrum". This is a wide range of opportunities and new ways.

Each person is in a certain environment (social, family, natural) with which he builds relationships and connections. In this environment, various kinds of promising ideas and established connections are being transformed into many realizing structures that manifest themselves in the form of projects, events, phenomena, etc., that is, into a constantly changing material world. All this leads to the emergence of new developing communication systems that transform new promising ideas.

The device “Perspective” contributes to the successful “embedding” of the user in this cycle of perspectives, creating the conditions for their manifestation in his life.

What is Svetlitsa Perspective used for?

1. To activate the communication system between external and internal.

We are talking about systems organized to transform the many tasks set by man before himself and the world. Each person, in order to build up his life and manifest himself in the world, embodies the tasks and goals of different levels.

The solution to these problems largely depends on the formed communication systems between internal and external. Inside, a person develops in himself various qualities (skills, abilities, knowledge). Outside himself, a person builds connections with other systems (home, work, leisure, etc.).

Product Perspective increases the likelihood of implementing existing communication systems and translating them into promising ones.

2. To select the correct action.

The question often arises: Am I acting correctly? To answer this question, "control actions" are taken.

Such an action is modeling on a small scale to identify promising options. In such a simulation, the implementation of the control action does not guarantee an answer to the question about the prospects of the main action.

In this case, it will be necessary to repeatedly repeat the control action, which takes the most important resource of a person - his lifetime. Also, other tangible and intangible resources may be wasted.
The Perspective device reduces the likelihood of a wrong control action.

Example: An organization wants to find a component supplier for its products. In order to take less risk, test purchases are conducted from different suppliers and analyze the quality of these components. If there are many suppliers, and there are no obvious preferences, then the selection process may be delayed and require a large amount of resources.

By using the Perspective device, the decision maker will be able to strengthen his intuition and minimize the number of test purchases by quickly choosing the optimal supplier.
Another example is a girl looking for a matchmaker on a dating site. There is a group of applicants. How to choose the one with whom the relationship will be the most promising? Perspective will help the heart make the right choice.

The Perspective device helps to tune in to the "communication system with the Creator." Each person has tasks of the highest level, which he must solve in order to be fully realized in this world. They arise from his connection with the Creator. The more accurately such a relationship works, the better a person lives, the higher his level of prosperity, the higher his level of happiness.

The potential of each of us includes many levels and a large number of directions. The disclosure of potential includes the internal structure of the personality, the creative and labor path, the family, wealth, spiritual, intellectual and emotional development paths.

The potential of each can be awakened and realized as fully as possible in all areas of life. The prospect will accelerate the development and achievement of maximum opportunities, which will be based on the true purpose of man and his Light System (as part of all humanity).

5. To go beyond the limits.

Based on the property of the prospect of transferring systems from the unpromising state of the time structure to the prospective one (p. 1), the device also helps to develop systems of different time scales. That is, with the help of the Perspective, conditions are created for the joining of various structures of the lifetime.

Any person exists in certain conditions and limitations (limits). These are his various roles and connections. It is difficult to go beyond these limits, even if you really want to, because this is a consequence of the manifestations of a certain structure of the lifetime. Life, with other roles and connections, is tempting, but requires a complete restructuring of the structure of the lifetime. The prospect helps to create the conditions for such a transition, to create a system of matching structures.

For example, remember Mikhail Lomonosov. He lived in the Arkhangelsk village and he had the prospect of remaining forever a fisherman where he was born.

However, having overcome social and other restrictions, he walked on foot to Moscow, in a completely different life. However, he was not alone. Lomonosov sided with the caravan, which accepted it and supported it. Thus, the caravan here is the system that helped him make the transition to another promising life.

6. To enter the Creative State.

In life, everyone has moments of creative states, when everything turns out, the mood is wonderful, the soul sings. This state can be called the Creator's love for the Creator. The Perspective map contributes to the growth of the duration of such creative states. With the application of the Outlook, the feeling of fullness and satisfaction with life is growing. It helps establish additional connections that foster creativity.

7. To enhance and accelerate the plan.

The prospect helps to identify the place of manifestation of structures to enhance the implementation of the plan. Place in this context can be understood, both metaphorically and literally. The user of the Prospect begins to “hear with his heart” better where his plan and the plan of the Creator leads.

With Vista, it's getting easier to get "to the right place at the right time." Thus, the likelihood of a mistake is reduced, which can lead to failure or a delay in the implementation of conceived long-term desires. With the Perspective device, the likelihood of a faster and more complete fulfillment of a dream becomes higher.

Svetlitsa Prospect helps to ensure the future with a life time and identify the qualities necessary for this. It will also help provide intent with the power of life and prosperity, modeling systems in which the transcendental circle (impossible) becomes a proposed circumstance (possible and permissible).

Opinions of users who have researched the Svetlitsa Perspective:

Tatyana:
The picture is: I’m standing somewhere in the field. There is a stream from above, it passes through me and begins to change something. At first it was not clear what. A little later, the picture began to appear: as if from the outside I see myself, but I consist of some small pieces, and they begin to turn over like cards in solitaire (suitable - not suitable).

All this happens until all the pieces come together in one big puzzle (king or queen). While all this solitaire is going on, around reality, too, is moving in the same way. And as soon as the puzzle came together for me, the castle looms on the mountain and the road to it. I may be the storyteller, too, that’s what I saw. Moreover, for each person separately, the time for solitaire will work until he collects it.

Those. if a person presents his own way and himself in his own way, and not as intended from above, then you can fill up cones! Because the structure will still drag to where its highest destination. This can be called a gift from above or a blessing. But the thing is very cool !! It is not just building some structures, but in general, it can change an entire person beyond recognition (in a good sense). It is only necessary to learn how to turn off the brains on time and trust the Higher Mind more.

The assembly point is pulled out to the level of Manipura, channels of generic feeding are being worked out and personal strength is being pumped, and there is a clear feeling that I have things on my mother's side. Those. the best female option in the long runJ. In men, apparently, there will be a male version along the male line. So, the structure is very smart and picky !!

The prospect is constantly sorting out "solitaire" under the already cleansed capabilities of the body.

That is, the conclusion - Perspective gives the best version of the development of events, but at this starting point, based on the circumstances in which the person is at a given time.

Antonina:
Watched Vista. I liked the device. Soothes the mind, removes fears, works on psychosomatics. Gives a vision of goals and objectives. Opens the road. Shows how you can realize yourself. Answers questions within a person.

Helps to highlight an important goal for the soul, rejecting unnecessary ones. Those who hear and see are generally a cool driver. Establishes a connection with the Higher Self. If a person does not have the ability to see and hear, then those roads will simply open, and situations and people will be attracted to the true goal and harmonious development.

Fruitful development and harmonious unfolding of potential in all spheres of life with the Sagittarius Perspective!