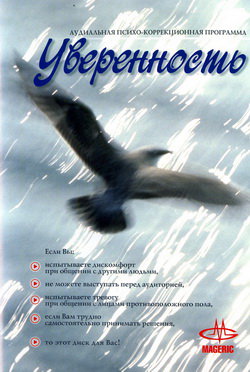 The program aims to increase confidence and elimination of "inferiority complex".

-Increase self-esteem and self-confidence (assertive effect),
-Improving the ability to make decisions
-The strengthening of comfort when communicating with others (affiliative effect),
-Increase own attractiveness (attractive effect).

Many of the problems in our lives – failures in career, financial instability, underestimation of others, relate their own insecurities.

We are afraid to make important and necessary decisions, too shy to defend their point of view, their interests, and the result will be much less successful than those that keep confident and not afraid to move forward.

This position of man is connected with low self-esteem. People with low levels of self-esteem, tend to downplay their qualities and their capabilities, so that they are eliminated from the decision of any vital problems, seek to shift the responsibility for important decisions (even regarding only their future) to other people.

It is a low self-esteem creates uncertainty, which does not allow us to move freely through life.

The self-esteem of the person is formed in early childhood. Parents comparing their children and indicating (by underlining) the viability of others, and a passion for, without realizing it, form their uncertainty and indecision, lay them so-called "inferiority complex".

The face small and large challenges in life, and not being able to resolve them independently, the child is receiving such education, once again convinced that it is untenable that he can not do anything. In the end, he ceases to do anything and withdraws into his own "capsule" of lack of initiative.

Another reason that contributes to human insecurity, also connected with children's education. It lies in the fact that the child is constantly restricted in his behavior and his deeds, from the desire to protect from possible negative consequences. Phrases such as "do not go There...", "you can't get on...", "There do not run..." with a detailed explanation of what "danger" lurking out there, actually don't save a child from these imaginary dangers, and forms his image of the "dangerous world" in which "it is better not to stick out."

In other words, uncertainty is not an innate property, and quality, laid down the wrong upbringing. It was the adults who program their children, initially full, free and ingenuous, to be ineffective. So the only way of liberation from such conditions of insecurity, inferiority and the lack of initiative is the elimination of the negative programs of education or its replacement on the positive.

This task can only be performed by a variety of methods of psychological correction. In particular, from the uncertainty and its attendant psychological problems can be eliminated, groups of psychological training, or by resorting to the help of an experienced psychologist. But, in our experience, many people with insecurity precisely because of this quality are afraid to visit the training groups. Or they not allow to take the help of a psychologist and training in the group lack of time or high prices for services.

APK-program "CONFIDENCE" is designed to solve this problem at home. Although, the use of the program "CONFIDENCE" does not mean obligatory abandonment of other methods of correction. The combination of the unconscious impact, inherent in the program, with practical testing of new stereotypes of social behavior, for example, in situations of psychological training, will only serve to mutually reinforce the effect.