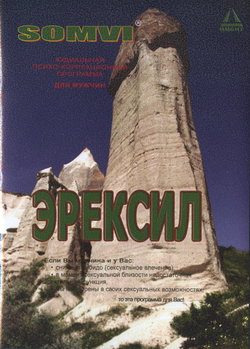 IfYou are a manand You have:

this program is for You!

According to the world Health Organization approximately every fifth man on the planet has some form of erectile dysfunction. Among men common misconception that erectile dysfunction comes with age. This is not true – with age increases the likelihood of various illnesses and the accumulation of the adverse effects of stress, which lead to disturbances of potency.

In most cases erectile dysfunction is related to psychological reasons (stress, fatigue, fear of sexual contact), self-doubt, low self-esteem. These psychological problems must be addressed in order to restore full regular sex life men regain his confidence in their abilities, increase self-esteem. After all, the inferiority in the sexual life not only affects health and psychological well-being, but also on social status, success in life, in career, for respect and self-respect.

APK-program "was Eroxil" designed for men to yourself at home to eliminate as psychological problems that led to erectile dysfunction, and secondary psychological disorders that arose as reactions to violations of potency (lowered mood, depression, anxiety, expectation of failure, low self-esteem). APK-program "was Eroxil" also restores the physiological mechanisms of erectile function.

APK-program "was EROXIL" recorded on 2 CD-ROMNo. 1 and No. 2,duration 20 mins One session full listening CD.
A course of therapy for up to 42 days. During the course, you must listen APK program in 3 stages:

During these phases of the programme should be monitored 1 time per day. Preferably in the evening, just before bedtime. In case of impossibility of holding the sessions of correction for any reason, is allowed to pass the audition (no more than 1 - 2 days). The volume level when conducting the sessions does not matter. You can set it to a very quiet volume level, if audible background annoys You. Not during the sessions of psychotherapy to read and listen to alternate audio sources (radio or TV).

Correction sessions can be combined with sexual intimacy or implement them directly before sexual intimacy. In the first case, it is desirable to set the stereo on repeat play, due to time constraints sound (20 min.).
Upon completion of the course (42 days) in the first 2 – 3 months is necessary sometimes (1 – 2 times a week) to listen to APK-the # 1 and APK-program No. 2 (in any order) to fasten the remedial effects.

Attention:due to the pronounced relaxation (relaxing) effect should not be listen APK-program, driving a car or performing other work, requiring greater attention.